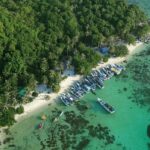 Karimun jawa is a popular tourist destination in the Pantura (northern coast) which consists of a group of beautiful natural islands. The tourist activities are exciting, ranging from snorkeling, diving, and trekking to mingling with local residents. These fun activities have increased the number of visiting tourists.

What are the Interesting Things in Karimunjawa?

Indonesia has many tourist destinations that are a mainstay, one of which is Karimun jawa which has been named a National Park. This tourist area keeps the beauty of healthy coral reefs, diverse marine life and harmonious local residents. The Hidden Paradise of Java must be visited at least once in a lifetime to enjoy the following exciting things:

The Karimun jawa Islands are formed from many groups of islands of different sizes. There are five large inhabited islands, the rest are small uninhabited islands. Island hopping is a fun activity to explore from one island to another.

The five significant islands are Karimunjawa, Kemujan, Parang, Nyamuk and Genting island. While the uninhabited islands are popular among tourists such as the  Menjangan Besar, Menjangan Kecil, Bengkoang, Burung, Krakal Besar and Krakal Kecil.

Trekking through the mangrove forest is an activity option that should not be missed. Tourists will be presented with various flora and fauna on the road made of wood.

In addition to beach tourism, the friendliness and diversity of local residents is the main attraction for tourists. Not many people know that the five ethnic groups in Indonesia, namely the Javanese, Bugis, Madurese, Bajau and Banjar, live side by side in harmony in Karimunjawa.

The differences between these tribes do not cause conflict, instead, it raised other forms of beauty that should be appreciated. This diversity makes many researchers come to the Karimunjawa Islands to explore the culture of the people more deeply.

Don’t miss snorkeling and diving because The Paradise of Java marine park is one of the best in Indonesia. There is a population of colorful coral reefs and a variety of small to large fish species.

The best spots for snorkeling are at Menjangan Kecil Island, Cemara Kecil, Tengah and Pulau Kecil. Tourists who are good at diving can try extreme diving on Kemojan Island. There is a shipwreck that is an icon to be seen under the sea.

There is a shark sanctuary on Menjangan Besar Island, which is a must-visit. Tourists are welcome to swim with these tame sharks without fear. Besides sharks, seeing dolphins on Menjangan Kecil Island and Cemara Kecil is also highly recommended.

The Karimunjawa archipelago deserves to be a prominent tourist spot in Indonesia. This tourist paradise of Java offers many amazing things, from the beaches and the diversity of their biota that is still preserved, the culture of the five tribes who live in harmony to the natural beauty.

Spread the loveMany hotels in Yogyakarta Malioboro Street are suitable for staying overnight while you’re in Yogyakarta after a tiring day of traveling to several destinations such as the Malioboro area, which is very crowded, the enchanting Yogyakarta Kraton, and

Read More about The 6 Nearest Hotels to Malioboro Yogyakarta

Spread the love  To maintain a healthy body, you don’t only need to eat everything healthy but also to keep an active lifestyle. We often read articles about how important it is to keep our body active by working out,

Spread the loveChungungo is a fishing town on the Chilean coast, in many regards it is fundamentally the same as the numerous other little communities, strung out along a large number of miles of Pacific coastline, that rely upon little